The flapper John Deere installs on their drills is a flat thin piece of plastic that runs to the top of the furrow, so when the press wheel comes along and the seeds are all over in the seed trench the press wheel will press them in the side walls as well as the bottom of the seed V. This causes uneven depth placement of seeds and can also cause uneven emergence of plants.

The Rebounder eliminates the uneven depth placement and thus enhances a more uniform emergence. The John Deere Drill Rebounder is only $10 per row and they pay for themselves on a 15′ drill in less than 150 acres of planting.

John Deere didn’t leave a good place on their drills to put starter fertilizer in-furrow, so we come up with several attachments to do so. These options work well with the Rebounder.

Tube Over the Press Wheel 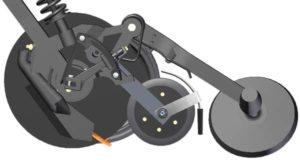 This is one of our earlier fertilizer tube attachments that we have put together for the John Deere 750-1990 No-Till Drills. As drills improved from the early 750s to the present-day 1990 drills, changes have been made. 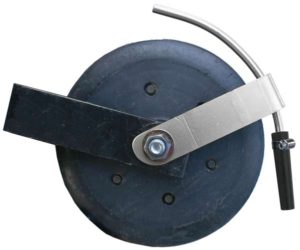 This prompted us to make a tube to go behind the press wheel tire. This worked fine as long as there wasn’t any trash involved. Where ever there was trash such as cobs and stalks they would get caught between the press wheel and the stainless tube and stop the wheel from turning.

With several years under our belt and working with farmers we have modified the fertilizer tube over the press wheel to work and perform much better. Our new stainless steel fertilizer tube is easy to install and runs over and behind 9″ John Deere press wheels.

We also recently added a new heavy duty rubber boot to the bottom of the fertilizer tube. This boot is specially made for our fertilizer tubes, designed to immediately snap back into place after hitting trash. It works better than the drag hose previously used. The rubber boot also helps eliminate fertilizer on the row unit.

BENEFITS OF THE STAINLESS FERTILIZER TUBE OVER THE PRESS WHEEL

BENEFITS OF THE 9″ PRESS WHEEL 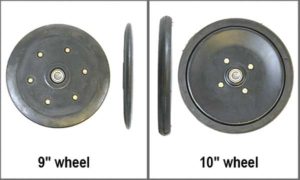 If you decide to keep the 10″ press wheel you will need a press wheel stop to prevent damage to the rebounder and the bolts on the press wheel.

The 10″ press wheel is larger, thus hitting the rebounder. This is why you need a press wheel stop.

The 9″ press wheel is by far better to use than the 10″ press wheel because of its shape for putting seeds in the bottom of the furrow better. The 9″ press wheel has more of a V type shape that will let it conform to the shape of the seed boot and single disc opener on the drill.

This is one of several designed attachments that Schaffert Mfg. Co. sells to place starter fertilizer in the furrow of most John Deere model 1560-1990 No-Till Drills. (NOTE: JD 750 Drills require a different mounted tube. Please specify when ordering if you have a JD 750 Drill.)

We call this “Chad’s Tube” because it was designed by a farmer named Chad who plants crops with a John Deere No-Till Drill. “Designed by a farmer for farmers.” It is probably one of the better ways to put starter in furrow with the seed.

Chad’s Tube works very well with the Rebounder on these models of drills because the Rebounder has a concave design to put all the seeds in the bottom of the furrow along with the fertilizer from Chad’s Tube. The Rebounder takes the place of the John Deere seed flap that sometimes leaves seeds on the side walls or out of the seed trench, thus making fertilizer placement less effective.

Farmers have found by using the Rebounder over the John Deere seed flap that they can back off on higher cost seeding rates because the Rebounder gives them uniform depth placement of all the seeds, and that in turn gives them larger numbers of plants germinating and more uniform emergence. In tests conducted with soybeans where farmers have decreased their seeding rates from 220,000 seeds down to 150,000 seeds per acre their yields haven’t dropped by using the Rebounder and starter fertilizer.

By cutting the seeding rate by almost 1/3 can be a substantial savings in seed costs and enough to pay for the Rebounder and Chad’s Tube in a small amount of acres planted. This makes the drill more like a planter.

The Fin places liquid fertilizer at the deepest point of the furrow. Regardless if the Fin’s are brand new or have worn to 50%, the patented design keeps the delivery point deep in the furrow. This means your equipment stays clean. Compared to traditional stainless steel tube delivery methods, splatter on the drill is virtually eliminated.